Without data, how would we know what we have to work on?

Although US ranks in the top tier of the richest countries in the world, it is near the bottom when it comes to maternal mortality. With a rising average maternal mortality rate, reaching 26.4 per 100,000 births in 2015, the US ranks 34th out of the 35 countries in Western Europe, North America and the high income countries of the Asia Pacific region.¹ A mother in the US is three times as likely to die from a pregnancy related condition compared to a mother in England or France, almost five times more likely than a mother in Denmark and seven times more than in Finland.

We have a lot to learn from California. Their collaborative statewide efforts contribute to better understanding of cause of maternal mortality and how to create effective interventions to reduce adverse outcomes. Safety initiatives have included extensive and careful collection of maternity related statistics, studies to document and understand the preventable causes of mortality and clinical management bundles to counter the underlying causes of poor outcome. 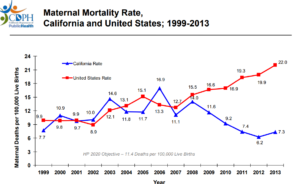 Both California-based research and the thorough reviews of maternal deaths in the UK have noted that failure to recognize and respond to clinical warning signs was a prominent theme.3,4 The UK pioneered a Maternal Early Warning System approach where by nurses and midwives would regularly score abnormalities, principally in maternal vital signs and level of consciousness. More abnormal observations were given higher values. A well-defined set of actions was tied to the final total score ranging from mandatory communication to senior staff to activation of an emergency team response. Early warning systems were one of the top 10 recommendations of the Confidential Inquiry. By 2013 their adoption was widespread.5 Maternal mortality rates have fallen steadily in the UK.

Likewise in California, a recent report on an Early Warning System tailored specifically for the recognition and treatment of hypertension and sepsis was associated with a 46 % reduction in Eclampsia and 17% fall in CDC defined severe maternal morbidity.6

What do these studies mean? Maternal mortality is a growing problem in the United States. If California and 31 of 35 developed countries can lower their rates, so can we all. The alternative is untenable and lethal.