Survey: Women 18 to 44 Years Say Safety is Most Important Factor when Choosing a Hospital for Labor and Delivery 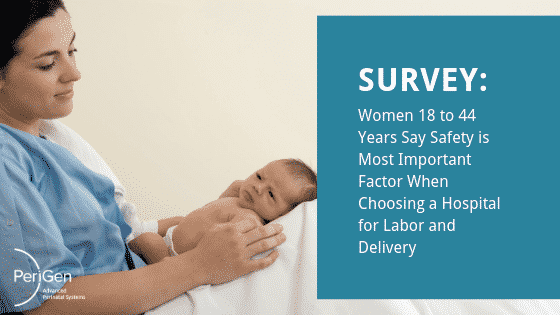 CARY, N.C., April 24, 2019 /PRNewswire/ — U.S. women aged 18 to 44 years rank a hospital’s safety measures as more important than location or comfort when choosing where to give birth, according to a new consumer survey released today by PeriGen®, the innovator in perinatal early warning systems for hospital labor and delivery (L&D) departments.

In addition, 90% of women ranked a hospital’s investment in technology to help nurses identify issues during childbirth to prevent negative outcomes as “important” to “very important” when it comes to choosing where to deliver.

The online poll of 200 women in the peak childbearing years (typically defined as 18 to 44 years) conducted by PollFish on behalf of PeriGen®, found that:

Despite many respondents having or knowing someone who experienced a difficult childbirth, it came as a surprise to over half of the survey respondents that the United States has one of the highest rates of death or injury of mother and/or baby during childbirth among developed nations. Similarly, 48% did not know that the majority of these deaths or injuries are preventable.

Once presented with these facts, 85% of women surveyed found it concerning that the United States is facing a public health crisis of women and babies experiencing negative outcomes during childbirth. For example, the United Statesranks 34th out of 35 countries for maternal mortality rate (MMR) out of all developed nations. The U.S. rate has increased by nearly 60 percent since 1990, while the overall MMR for the entire world has decreased by almost 30 percent.

“The data is finally being recognized as indicative of a public health crisis and spawning growing media coverage, Congressional inquiries and a new Joint Commission performance measure looking at unexpected complications in childbirth,” said Matthew Sappern, CEO of PeriGen.

Safety measures and technology most importantWith the rise in MMR and the high rate of negative outcomes that actually are preventable, Sappern believes “it is a clinical, financial and moral imperative to look at how modern technologies might be used to impact patient care.  Expectant mothers today have grown up with technology all their lives and they expect and will seek out facilities who leverage the same.”

Education and training, long-standing staples of patient safety programs, are effective but not sufficient. Studies suggest that lack of knowledge is not a common problem in preventable incidents; rather poor recognition of the degree of illness, lack of communication and failure to seek help in a timely fashion are the biggest contributors.  “This country has some of the best trained, most committed nurses in the world, but we need to equip them better,” said Sappern.

“Rather than attempting to discover potential issues amidst a sea of data that may or may not be important, clinicians can spend their time evaluating potentially concerning patterns flagged during labor via AI technology,” Sappern said. “By using what some end users refer to as ‘an angel on their shoulder’ along with clinical experience and expertise, clinicians can then determine the appropriate path forward that protects the safety of the mom and baby.”

ABOUT PERIGEN, INC.PeriGen offers innovative perinatal software solutions that incorporate advanced statistical analysis features to enhance clinical efficiency and standardization of care during childbirth. Led by skilled OB practitioners and IT visionaries, PeriGen has created the PeriWatch® platform to provide consistent analysis and efficient display of complex data in real-time to promote better human recognition and communication about impending problems during labor. With PeriWatch®, clinicians can spend more time on direct patient care and less time on manual calculations and data manipulation. To learn more, visit www.perigen.com; follow us on Twitter, LinkedIn, YouTube, and Facebook; or call 877.700.4755 or email.